The State New Zealand surf lifesaving championships got off to a perfect start at Midway Beach in Gisborne yesterday, with the masters strutting their stuff in perfect conditions.

Omanu's weight of numbers helped them retain the overall masters club championship title, finishing on 83 points, 18 ahead of Waikanae.

But the event was more a celebration of Surf Life Saving New Zealand's motto 'In it for Life', marked in no small part by the presence of 81-year-old Omanu veteran Sid Salek, Red Beach legend Reg Harker, 74, and South Brighton's Robert Blair.

Harker was a New Zealand representative in the 1960s and won a then-record five national surf race titles between 1957 and 1970, while Salek continues to amaze with his tireless performances, both in the water and on the beach.

Among the individual stars were Waikanae pair Michael Fitzharris and Debbie Hutchings, who dominated the 40-49 division, while SLSNZ chairman Michael Bassett-Foss also featured strongly in the 40-49 agegroup.

East End's Hayden Corkin took out the 30-39 division, while his father Trevor, having just completed the Auckland to Wellington cycle race at 67, also performed strongly in his division. 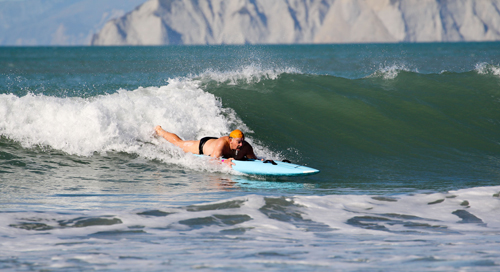 South Brighton's Robert Blair on his way to victory in the men's 70+ board race yesterday.  Photo by Barbara Newton.

Click here to view the full set of Masters results