Fresh from winning the national under-20 100-200m track double - the former in a blistering 10.56secs - the Papamoa 17-year-old upstaged Australasia's fastest on the sand to cement a unique double, just two weeks after winning the New Zealand open title.

"I'm just over the moon, especially seeing as I came into this with a bit of a hamstring problem," Harman said.  "But the hammy seemed to get better the more rounds I did and I tossed back a couple of concrete pills before the final and hardened up!  It's been a big few weeks for me and this is the perfect way to end the season."

Harman eased home in today's final, although things were much tighter behind him, with North Cottesloe's Thomas Nolan and Kurrawa's Ben Mispelhorn finishing second-equal.  Another New Zealander, Paul Cracroft-Wilson, was sixth.

Harman, discovered last night he'd also been added to the New Zealand team for the World Junior athletics championships in June, wasn't content with one gold, however. He also helped the Papamoa under-19 beach relay team - also featuring Danny Kayes, Jordan Hills and Hamish Smith - to victory in their final.  The same combination also won the New Zealand open and under-19 titles a fortnight ago in Gisborne.

The championships resumed at North Kirra Beach yesterday after the drowning of Maroochydore 14-year-old Matt Barclay on Wednesday, and Papamoa's liking for the coarse Kirra sand continued when 13-year-old Maia Bryant, one of the youngest competitors at the carnival, won silver in the under-15 2km beach run.

The flood of Kiwi medals came a day after Australian-based Chanel Hickman helped her Kurrawa club win the open women's beach relay, combining with Melissa Howard, Tegan Maffescioni and Kelly McDonnell to head off Cronulla and City of Perth.

A number of New Zealanders have also made finals tomorrow on the final day of competition. 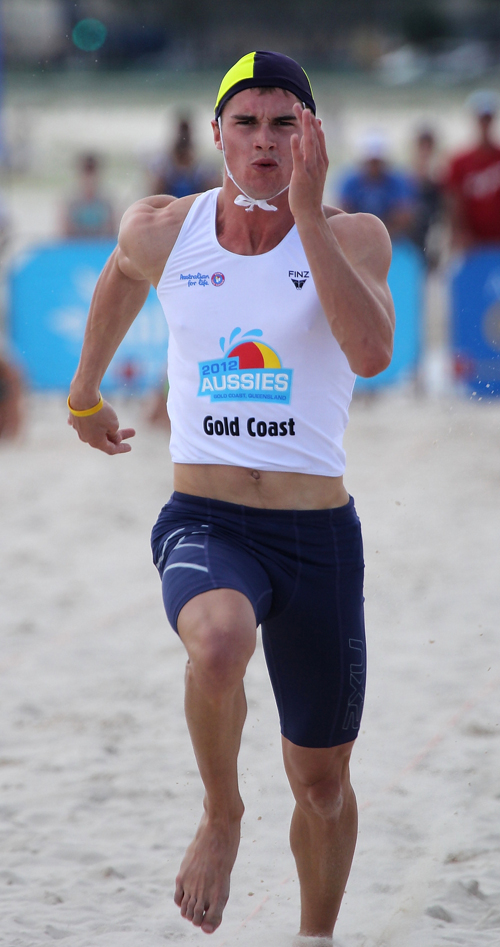 Papamoa's Kodi Harman on his way to victory in the open men's beach sprint at the Australian surf life saving championships on the Gold Coast today.  PHOTO by Jamie Nilsson