Papamoa got off to a fast start, in every sense, on the opening day of the State New Zealand surf life saving championships in Gisborne.

"I definitely didn't expect to come away with three golds but this was a special day," Harman said.  "We all managed to hold our own throughout the relay legs and didn't back down the whole way - I'm really proud of the other guys."

Harman is the reigning New Zealand schools track champion in both 100m and 200m and heads into the national track and field championships next week chasing the under-20 title with a recent best time of 10.52secs for the 100m.

Wright and Moczydlowski then combined with Tamsyn McGarva and Karina Radley to win Mount's ninth consecutive open women's beach relay title, with Moczydlowski having appeared in all nine.

Omanu's Max Beattie, who is based at the strong Northcliffe club on the Gold Coast, then won a dramatic sprint up the beach to capture the open men's run-swim-run crown.

Anderson, who has won the national run-swim-run title six times previously, faded to fourth, while Beattie's fast legs took him past Janes (second) and Olympic kayaker and swimmer Ferguson.

"I had a bit of a GPS error when I ran into the water on the right-hand side and had to cut back a bit to get back on the guys feet and then after I got around the can, I came home as fast as I could," Beattie said. "I love running and I knew if I could get my legs up and be the first one to the hard sand, I wouldn't be too far off giving it a shot."

Beattie, who trains with Northcliffe stars Zane Holmes and Shannon Eckstein, admitted the cool southerly conditions in Gisborne took some getting used to.

"I jumped in the water and it was a huge shock to the system but the training over there at Northcliffe is invaluable - you line up each day against the best ironmen in the world and the weather doesn't really bother you if you know you've got that sort of training behind you."

Westshore's Nikki Cox and Larissa Cowlrick claimed back the open women's board rescue title they last held in 2007 when they beat New Plymouth Old Boys and Mairangi Bay combinations to the beach.

A rising southerly swell is forecast for the second day of action tomorrow. 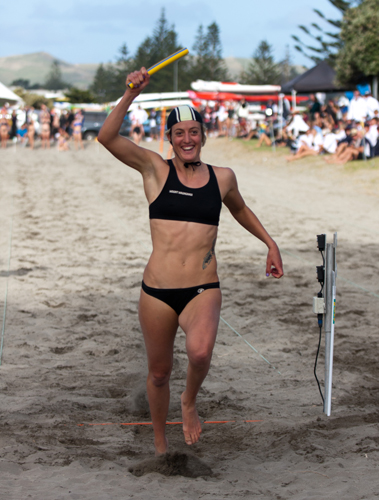 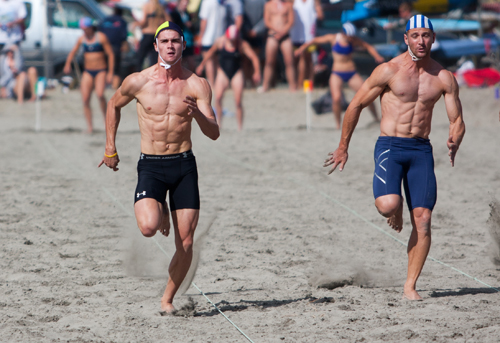