Omanu's Max Beattie, who is based at the strong Northcliffe club on the Gold Coast, then won a dramatic sprint up the beach to capture the open men's run-swim-run crown.

Anderson, who has won the national run-swim-run title six times previously, faded to fourth, while Beattie's fast legs took him past Janes (second) and Olympic kayaker and swimmer Ferguson.

"I had a bit of a GPS error when I ran into the water on the right-hand side and had to cut back a bit to get back on the guys feet and then after I got around the can, I came home as fast as I could," Beattie said.

"I love running and I knew if I could get my legs up and be the first one to the hard sand, I knew I wouldn't be too far off giving it a shot."

Beattie, who trains with Northcliffe stars Zane Holmes and Shannon Eckstein, admitted the cool southerly conditions in Gisborne took some getting used to.

"I jumped in the water and it was a huge shock to the system but the training over there at Northcliffe is invaluable - you line up each day against the best ironmen in the world and the weather doesn't really bother you if you know you've got that sort of training behind you." 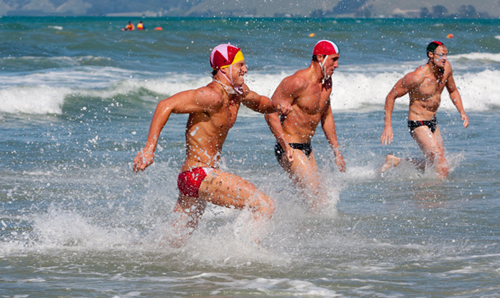