New Zealand surf lifesaving stars Glenn Anderson and Ayla Dunlop-Barrett have pulled out of the Rescue 2012 world championships later this year - though they've got the best excuse imaginable.

The couple have announced Dunlop-Barrett is expecting their first child in the same week as the championships kick off in Adelaide in November.

Anderson is a veteran of the last five world championships and was the incumbent team captain, while Dunlop-Barrett has been in the national squad since 2006.

"It's a shame it's not going to work out for us to go this time around but we're completely stoked to be having our first child and it's a really exciting time for us," Anderson said.

"A lot of the team have literally been around the world with Ayla and I a number of times, and they were delighted for us when we broke the news to them.  We've had awesome support and we'll definitely be still with the team in spirit as they look to bring home the world championship title."

At 32, Anderson is still winning national titles and is reluctant to admit this could be the end of his remarkable international career.

"I thought 2008 was going to be it for me at that level and I thought the same after the worlds in 2010 as well, so I guess the thing I've learned from that is that you just never really know! I'll still be racing all the domestic stuff this coming season, while Ayla's only 25 so if all does well with the baby, don't be surprised to see her on the beach for New Plymouth Old Boys again in the near future."

It's set to be a huge year for the couple, as they are also opening a new swimming school in New Plymouth at the end of the third term, with builders beginning work last week on a new purpose-built facility.

While their absence leaves a big hole in the New Zealand squad, national coach Scott Bartlett is taking a pragmatic approach to the news.

"There's always the chance of losing squad members to illness or injury so if we were ever going to lose two athletes of the calibre of Glenn and Ayla, it's far more preferable for it to happen like this," Bartlett said.

"We're just thrilled for both of them - everyone I've talked to in the surf lifesaving community feels the same way - and the team will hopefully have a brand new supporter firmly in their minds when they line up in Adelaide."

Five-time New Zealand ironman champion Daniel Moodie and national surf race title holder Mike Janes have been added to the enlarged squad, which will be whittled down to the final 12-strong team for Adelaide, while New Zealand is also sending an under-20 development team to Rescue 2012.

Australian-based star Devon Halligan recently made herself available for New Zealand, after winning the Australian under-19 ironwoman title and finishing second in the open ranks. 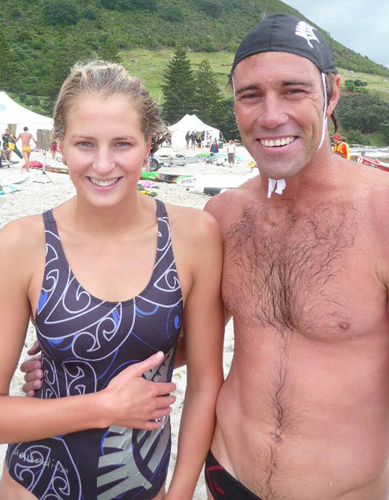