The hint of swell has West Coast crews salivating as they head into this weekend's North Island surf boat championships at Waihi Beach.

Most of the 59 crews warmed up for the event at last week's Eastern Regional championships at a lake-like Mount Maunganui, while the previous two rounds of the boat series in Paekakariki and Whangamata also had small waves.

Forecasts suggest things could change at Waihi, however, which has got Piha Boomers sweep Shane "Bugsy" O'Halloran frothing.

"We're really up for this weekend - there's a few things we've been working on lately and if we can get a 3-4 foot wave in Waihi, watch this space," O'Halloran said.

"We train to perform in decent waves and it's always a lot more enjoyable when we turn up at a beach to find the swell hitting. Having said that, surf can turn races and it's often just as much an advantage for the underdogs."

O'Halloran's crew had a great tussle at the ERCs with clubmates Piha Equipe, swept by Mark Bourneville, with Bourneville's crew taking both long and short-course titles and the Boomers grabbing a second and a third.

The young Titahi Bay crew upset Piha Equipe in Whangamata, however, and crews from Red Beach, Mairangi Bay and Orewa will also be chasing hard this weekend.

Piha's under-23 crews were much closer, however, sharing a win each, with O'Halloran also casting a wary eye over his shoulder at the chasing pack in that division.

"The two Piha crews always have a good battle while the new crew from Sunset Beach have been going fantastic.  And there's always our old rivals from Paekakariki - put any of them into conditions with a decent wave and they'll definitely be a challenge."

But Mairangi Bay will be anxious not to repeat their disaster at Whangamata, where they broached on a wave and slipped back to third, behind Orewa and Mount Maunganui.

Fierce racing is also expected in the under-21 women's division and the growing under-19 men's grade. 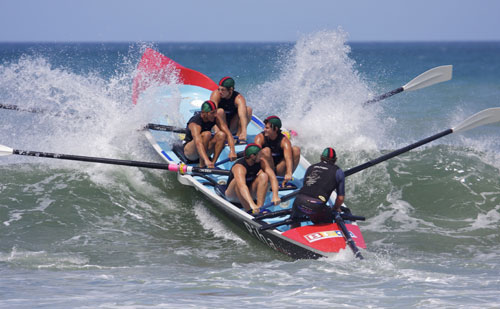 The under-23 Piha Pirates, swept by Shane "Bugsy" O'Halloran, competing at the second round of the
national series in Whangamata. Photo by Jamie Troughton/Dscribe Journalism.