Some of the smaller surf lifesaving clubs got a chance to shine on the first day of the Oceans under-14 New Zealand championships in Mount Maunganui today.

Mangawhai Heads, Waihi Beach and Worser Bay all picked up points against the larger clubs in driving rain and large seas at the Bay of Plenty venue, with finals completed in the beach flags and run-swim-run events.

Mangawhai Heads was again led by Auckland representative Hannah Williams, who won the under-14 run-swim-run, while Lochlainn O'Connor picked up a meritorious win in the under-11 boys for Waihi Beach.  Worser Bay, based in Wellington, had the Oolders siblings to thank for their points, meanwhile, with Katie Oolders grabbing second behind Red Beach star Jade Tuilaepa in the under-12 beach flags and Tom Oolders finishing third in the under-14 boys beach flags, behind Lewis Gjatema (Red Beach) and East End's Javon McCallum.

Gjatema and Tuilaepa both helped Red Beach to an early lead in the four-day carnival, although they were well supported by a string of podium placings throughout both events.

Omanu are in second place thanks to their under-11 beach flags dominance - William van der Beek won the boys and Jordan York was third, while Ella Pollock won the girls.  Kane Sefton completed a good day for the local club by winning the under-14 boys run-swim-run.

The best news for organiers is that clearing skies and dropping swells are forecast for Mount Maunganui over the next three days.4 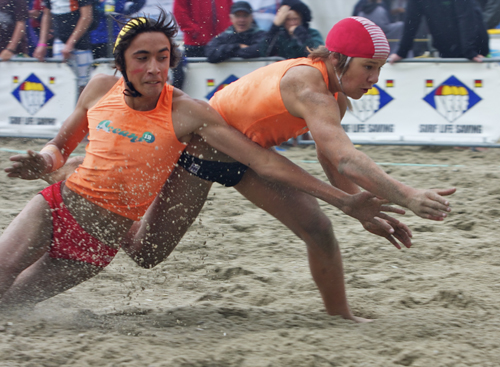