The Hibiscus Coast club finished finals day with 68 points, with local club Omanu second on 46.  There was a three-way tie for third between Mount Maunganui, Orewa and Papamoa.

Red Beach shared the title last year with Papamoa but junior convener Mark Scheib said the depth was much greater in the club this time around.

"They stepped up from last year and our support networks have been spot-on," Scheib said. "What really did it for us was the team events - we picked up valuable points throughout the relays and that made a huge difference when the points were added up."

Red Beach open stars Dylan French, AJ Maney and Jared Pouwhare have been among those helping out with coaching the younger age-groups, with Vaughan Skiffington operating as overall club coach.

But there was still time for the smaller clubs to shine - Mangawhai Heads under-14 star Hannah Williams accounted for all her club's 12 points, ending with triple wins in the diamond, surf and board races on the last day. 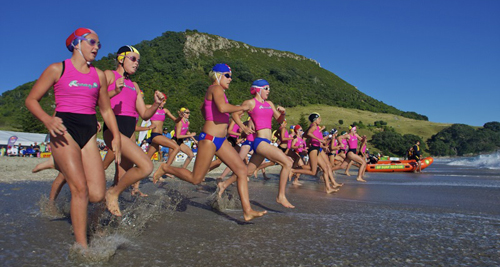 The under-12 girls surf race gets underway on the final day of the  Oceans 12 under-14 New Zealand surf lifesaving championships in Mount Maunganui today. Photo by Jamie Troughton/Dscribe Journalism.