The ASRL Open is the world's biggest dedicated surf boat event and the New Zealand contingent went with only one thing in mind, to win.

Both Piha and Mairangi Magic were also selected as New Zealand's top open crews to take part in a trans-tasman club race coined the "Battle of the Ditch", they would face Lorne and South Curl Curl respectively.

Mairangi Magic had a late injury to one of their crew members which saw them take a replacement rower Australia. The change in crew member coupled with unfamiliar and inadequate equipment saw Mairangi Magic come off second best in their one of race with Australians South Curl Curl.

In the open men's "Battle of the Ditch", Piha A blasted off the start and held a good lead of a boat length at the buoy turn with Lorne chasing hard.

Piha A hit the afterburners coming home to pull another length on Lorne in the small surf. A lucky runner for Lorne saw Australia's top club come up even with Piha A, with the race coming down to a sprint at the line.

The race finish saw both crews wondering who got the result, a few minutes passed before the silence was broken with the announcement that Piha A had claimed the spoils of the day.

New Zealand crews in the open men's division have now been successful in the last four trans-tasman clashes, dominating their Australian counterparts since 2005.

Celebrations for the Piha A crew had to wait as they continued to move their way through the ASRL Open making the final with some superb sweeping in the semi final by Mark 'Horse' Bourneville holding the wave of the day.

The open men's final didn't disappoint for quality as all six finalists finished the race on the same wave.

Again crews and spectators were made to wait as the results were decided from video reply, and again Piha A were victorious becoming the first New Zealand Surf boat crew to win the ASRL Open.

Mairangi Magic produced some fantastic results in the face of adversity with a first and second in their round robin races to make the quarter finals.

Mairangi's Magic ran out as they were pipped on line in their quarter final, the crew is pleased with their result, coming in the top 24 of 72 crews, fantastic considering the cards they were dealt. Mt Maunganui ladies showed promise but were knocked out after the three round robin races.

Horse had the following to say about the weekend "Piha A Crew boys did all this in a trip they organised themselves with fantastic support and sponsorship from Bill and David - from Autex " Greenstuff " and used a borrowed boat (Thanks Scotty from Jan Juc and Westpac) borrowed Oars and hired a car for the drive up and back.. and it's not a bad effort. Hard to repeat that weekend."

Piha A will again attempt to beat the Australians when they attend the Australian Surf Life Saving Nationals at the end of the season. All the best to Horse and his crew! 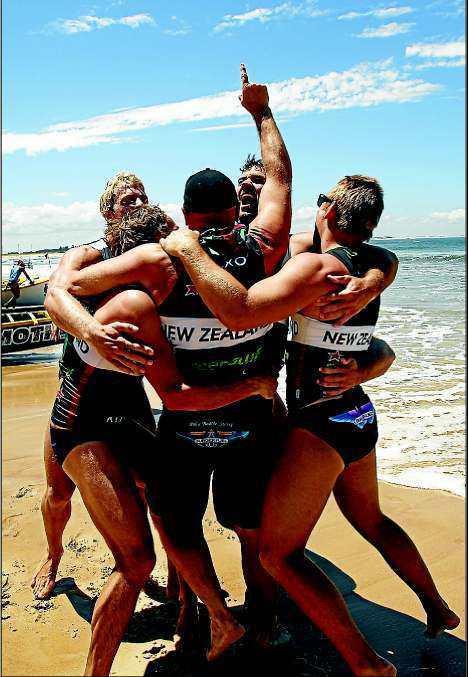