Peat back at scene of youthful surf dominance

The Papamoa star was nigh unbeatable in the junior agegroups, also collecting fistfuls of diamond lady and run-swim-run crowns since first entering as a 9-year-old.

This week Peat will be back in the Oceans 12 arena, albeit in far different company.  The 17-year-old has secured a spot in the ironwoman final for the Sonic Race Series decider, which will be held during the lunch break in Saturday's under-14 action.

Peat comes into the finale having also wrapped up the Sonic surf race crown, a model of consistency across the five rounds.

"I wasn't expecting to do so well in my first year stepping up into the open grade but have been so happy with my results and it's been awesome getting to race in a stronger, faster age-group," Peat, a Te Puke High School student, said.

"This is my first year doing a proper three-leg ironman course and I've been improving and learning every race. I haven't been too far behind the top girls so far this season so I'm really looking forward to pushing myself to try and be right up there with them the whole time in the final this weekend."

The finalist spots were only decided on Sunday after the conclusion of the Northern (in Ruakaka) and Southern (in Christchuch) Regional championships and Red Beach athletes dominate the ironman final field, with AJ Maney qualifying first, Dylan French second-equal and Jared Pouwhare sixth.

"We're really starting to see a bubble of former under-14 stars rising through into the open ranks and challenging for placings," Edwards said.  "Having the Sonic series grand final during Oceans 12 is a great way to show the junior athletes the pathway to the top - in just three years, some of them may be racing at that level too."

The four-day Oceans 12 carnival starts today, with more than 700 athletes from 41 clubs around New Zealand competing.

Papamoa will be looking to reclaim sole possession of the overall Oceans club title after sharing the spoils with Red Beach last year - Papamoa trailed Red Beach by four points heading into the final two events but picked up a second in the under-12 Cameron relay and a fighting third in the under-14 Cameron relay to draw level. 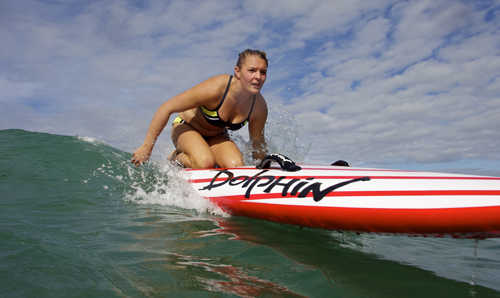