The annual provincial teams competition has a change in format this year, with the under-14 and under-16 teams joining the carnival, competing on Thursday and Friday.

All eight surf lifesaving provinces will be represented, while two teams from New South Wales will join the fray during the open and under-19 events on Saturday and Sunday.

Bay of Plenty are the defending under-19 champions, aiming for their third successive win, while the Bay open team finished third last year.

Papamoa teenager Natalie Peat and Mount Maunganui's IRB-racing siblings Chad and Kirby Wheeler will be the busiest athletes on the beach, racing for both under-19 and open teams, while 16-year-old Jess Miller was also do race the open run-swim-run.

Miller and Peat get their chances in the open arena after Aimee Berridge was called into the lucrative Kellogg's Nutrigrain Ironman series in Australia this weekend.

Both beach sprinter Shorter and Halligan - the daughter of former Kiwis rugby league player Daryl - have New Zealand passports but were born and raised across the Tasman.

Swimmer Adam Simpson has been training at the Mount for much of the summer, while Joe Kemp and Tamsyn McGarva will be dark horses in the sprint arena.

Auckland have plenty of experience and talent to call on, with board and ski specialist Kevin Morrison lining up for his 11th Surf League campaign and Chris Moors returning as national ironman champion. Mairangi Bay schoolgirl Danielle McKenzie has been in outstanding form during the Sonic Surf race series, while Maddie Boon and Rachel Clarke are both accomplished ironwomen.  National beach flags champion Chanel Hickman has also been recruited from Canterbury after joining Mairangi Bay this season.

Taranaki are seeking a fourth consecutive title, with New Zealand captain Glenn Anderson looking to continue a remarkable streak.  He's been involved in teams that have won the last five Surf League titles - the last three with Taranaki, as well as 2007 with Gisborne and 2008 with Bay of Plenty.  Taranaki will also lean heavily on their prodigious IRB crew of Andrew Cronin and James Moorwood, as well as world champion beach sprinter Paul Cracroft-Wilson, swim star Ayla Dunlop-Barrett and national ski champion Dan Nelson.

Wellington's ranks have been swollen by young stars like Kayla Imrie and Tyler Maxwell, while Richard Whinham and Brent Harvey complete the capital's IRB crew.

Canterbury's key member is once again triple world beach flags champion Morgan Foster. The 36-year-old, who has been competing at this level for the best part of two decades, showed his effervescent form by winning the flags title at the Eastern Regional championships last month, beating long-time rival Cracroft-Wilson in the final.  Ski paddler Steven Drabble will also be tough to haul in in his favoured event.

Hawke's Bay were second last year in a consummate team performance and boast the brilliance of ironwoman Nikki Cox and five-time New Zealand ironman champion Daniel Moodie.  Moodie missed the Surf League last year with injury and has taken time out from the sport since but his wave nous and technical skills make him a danger to the entire ironman field.  Ski paddler Scott Bicknell and rising IRB stars Mike Harman and Ben Cross should also provide a steady stream of points.

Two teams from New South Wales will also compete, with an under-21 side racing in the open arena and an under-19 side taking on the New Zealand provinces in that division.  Talented surf swimmer Mitchell Fagerstrom and sprinter Katie Williams - the under-19 Australian flags and sprint title holder - bolster the team.

The fast-paced weekend event will feature 17 events a day, with under-19 athletes competing on Mount Maunganui's Main Beach in the morning and senior athletes doing battle in the afternoon. 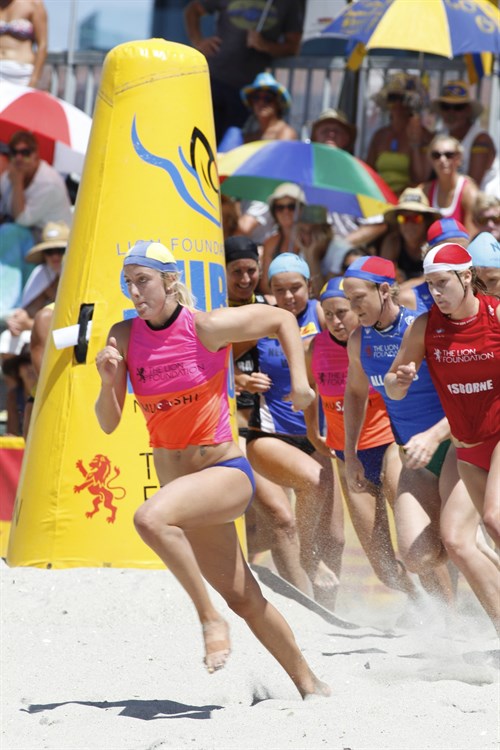 Bay of Plenty's Arna Wright leads the charge into the water during the board race at last year's Lion Foundation NZ Surf League.
Photo by Mark Dwyer/Lava Media.

Thank you to our Surf Lifeguard legends on...