Piha continued their New Zealand men's surf boat success at the first round of the national series in Paekakariki yesterday, though the manner of their victory was far from typical.

In testing, blustery conditions with a strong current and chop, the neighbouring Titahi Bay crew nearly snatched the opening round and an early lead in the race to secure the spot in the trans-Tasman test against Australia's best crews at Waihi in February.

Swept by Wil McDowell and packed with under-23 talent, Titahi Bay caught a wave and pulled up alongside Piha in the final, though when both crews broached, it was Piha who recovered quickest.

"We had a good start and were leading pretty comfortably going out but the conditions were tough and all the boats were copping a lot of chop on the nose," Piha sweep Mark Bourneville said.  "There were also some good waves and runners to be had, which meant it was a day for potential upsets and when Titahi Bay jumped on a screamer coming in behind us and caught us up, I thought 'here we go'. Luckily we got a better run and they stalled and we were able to come through - we were definitely pretty pleased to get a win in those sort of conditions."

The defending national champions - with Matt Kirke, Chris Morris, Ben Scott, Scott Lissington and Paul Gerritsen sharing rowing duties - were delighted with the standard of competition, with Bourneville admitting a handful of other crews were capable of challenging for the New Zealand team selection in February.  Piha's second crew, swept by Bugsy O'Halloran, finished third, followed home by Paekakariki, Orewa and New Brighton in the six-boat final.

A jubilant Red Beach women's crew celebrated a slick upset win in their final, meanwhile, after a poor start by defending national champions Mairangi Bay.  Unbeaten during their heats and semifinals, Mairangi Bay looked to continue their recent dominance but lost a rower overboard in the windy chop and never recovered. 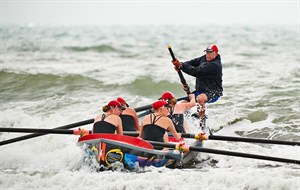 "We've put in a whole lot of work to get this result and we're ecstatic to have nailed it in such testing conditions, against such tough competition," crew captain and second bow Talaic said.  "This has given us a huge shot of confidence and means we can really focus on giving that New Zealand selection a serious nudge."

Bourneville capped a dream day by winning the treble, sweeping both his under-23 and under-19 men's crews to victory in their divisions and picking up second in the under-21 women for good measure, behind the strong Rarangi crew from Blenheim.

Hosts Paekakariki, swept by Steve Dickson, grabbed the final title of the day in the under-19 women's division, heading home Titahi Bay and Rarangi.

The next round of the series is in Whangamata on January 2.  The revamped four-round series will finish with the North Island championships at Waihi Beach in February, which will also feature the trans-Tasman test.

Please note: some of these names may be incorrect due to crew changes. If you know any are incorrect please email jamie.nilsson@surflifesaving.org.nz to have them changed.