Last month they were on top of the world - now New Zealand Surf Lifesavers are on their knees after a dramatic and unprecedented cut to their government-backed funding.

The sport has been hit with a massive $380,000, or 54 percent drop in funding from High Performance Sport New Zealand (HPSNZ), jeopardising the Black Fins' defence of their world title in France in 2014.

After winning the 2012 World Championships in Adelaide in November, Surf Life Saving New Zealand (SLSNZ) high performance manager Brad Edwards had been hoping for an increase in his campaign budget for 2013-2014, given the next World Championships are in Europe and the challenge of defending the title against the wounded Australians.

Instead, he's watched his funding cut from $710,000 to $330,000.  Crucially, SLSNZ's entire PEGs (athlete performance enhancement grants) eligibility has been eliminated completely. "Our agreed goal with HPSNZ was to win the world championship and we not only achieved that, we did it in style, beating Australia on their own sand by more than 80 points," Edwards explained.
"We're definitely hurting after this announcement - we are World Champions, we've delivered the outcome HPSNZ invested in and we simply do not understand what's changed."

While surf lifesaving is not an Olympic sport, SLSNZ was hoping to fulfill HPSNZ's goal of "Winning at World Championships in targeted non-Olympic sports." Surf lifesaving has also proved an ideal breeding ground for sports such as kayaking, swimming and triathlon, which are Olympic sports.
Of the 2012 London Olympic team, swimmers Natasha Hind, Dylan Dunlop-Barrett, Andy McMillan, and Steven Kent are all current club members, as are kayakers Erin Taylor, Lisa Carrington, Teneale Hatton, Steven Ferguson, Darryl Fitzgerald and whitewater slalom star Luuka Jones. Andrea Hewitt was also a surf lifesaving star before switching to triathlon.

The sport of surf lifesaving is also unique in that it provides a key recruitment and retention tool for volunteer lifeguards who patrol beaches and prevent drowning across New Zealand every summer. Here, the flow-on impact of a reduced high performance programme could affect all New Zealanders. "We've got an incredibly supportive and loyal membership who were delighted at finally capturing a world championship just last month, sharing the jubilation of the team," SLSNZ Chief Executive Paul Dalton said. "Unfortunately, the very nature of our movement means our members also share the pain and this funding decision will affect all our members, whether they have ambitions to represent their country or whether they're training to help save more lives on our beaches and waterways."

In contrast the shell-shocked Australians, having lost the world title for the first time since 1998, are likely to get a boost from the Australian Sports Commission, while Surf Life Saving Australia's role in producing Olympians has been recognised by an Olympic feeder programme called 'The Next Wave'.

Edwards said. "We'll be struggling to retain our world champion athletes who did such an incredible job in Adelaide and that would be disastrous, not only for them, but also for the next generation of surf athletes coming through." 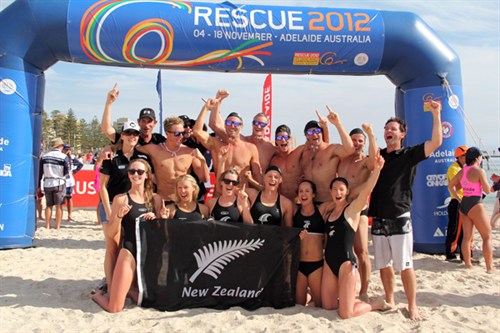