Sunset Beach took a narrow lead into the final day of the North Island IRB championships in Ohope today, despite Waimarama dominating the podium.

Waimarama's premier crew of Mike Harman and Ben Cross dominated the premier division in the tube rescue and mass rescue finals on the first day of the carnival, which doubles as the second round of the BP Surf Rescue national series.

The Hawke's Bay duo also helped win the teams race final, while their club's under-21 crew also picked up the mass rescue final.

In contrast, Sunset Beach - from the mouth of the Waikato River - only picked up one gold, when Sam Dwen and Shane Edwards grabbed the tube rescue title but picked up enough placings with their six crews to collect 35 points from the day, one ahead of Waimarama. Dwen and Edwards found the 1m swells tricky but mastered their starts, which proved the difference.

"We've come a long way - not so long ago it was just me and Sam racing but now we've got six crews, all still under-21, and we're the leading crew overall," Edwards said.   "We're hoping to just maintain that consistency tomorrow, pick up a few more medals and see where it takes us. 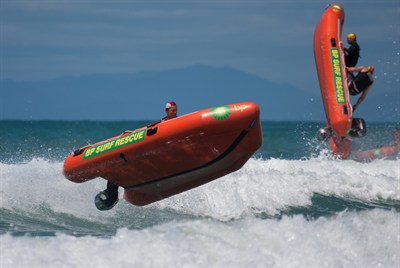 Muriwai's under-21 crew head for trouble (right) while Waimarama head back into the beach in the mass rescue heats at the second round of the BP Surf Rescue series, doubling as the North Island champs, at  Ohope Beach. Photo by Jamie Troughton/Dscribe Journalism.