The 18-year-old will line up in the Whangamata Classic surf lifesaving carnival, the opening round of the national Sonic Surf Race series at the Coromandel beach, along with more than 500 other surf athletes from around New Zealand.

McKenzie has just finished her last year at Auckland's Rangitoto College and the Mairangi Bay club member excelled across a range of sports.

She's also just returned from a starring role at the Rescue 2012 world surf lifesaving championships in Adelaide, where she was a key member of the New Zealand under-20 team that finished second behind Australia.

"I was disappointed I didn't come back with a gold but seven silvers was still pretty satisfying," McKenzie said.  "I had a biology exam the day after I got home so there wasn't too much time to sit back and reflect and I finished the last of my exams a week ago so my fitness definitely isn't at its peak.  But it's getting there - I'm really looking forward to seeing how I go in the series and push for a place in the New Zealand open team next year."

Part of her preparation was dabbling in yet another sport.  Already an accomplished triathlete (having claimed two silver medals at three world championships), multisport athlete (twice national schools champion) and cyclist, she competed in her first kayaking regatta in Rotorua last week. McKenzie, who is sponsored by Subway, Balance Nutrition and Sonic Surf Craft, hopes to use the flatwater paddling discipline to build on her ski paddling in the surf, adding to her board paddling prowess and swimming skills to become an unbeatable ironwoman.

Her rivals at the Whangamata carnival, which is jointly hosted by Surf Life Saving Northern Region and SLSNZ Eastern Region, will be fierce.  Her national under-20 teammate Natalie Peat, who has also just turned 18, will be looking to defend her series title in the surf race, while former New Zealand ironwoman champion Rachel Clarke will also compete. Wainui's Laura Quilter, who helped New Zealand win the open title at Rescue 2012 last month, will be a serious contender in the swim events.

The men's ranks include Piha coach Steven Ferguson, the four-time Olympic swimmer and kayaker, who was also part of New Zealand's first world title in 14 years, while Midway ironman Cory Taylor won three individual titles and a cluster of team medals with the New Zealand under-20 team.

The national champion Piha men's surf boat crew will also be racing, preparing for the second round of the national series in Whangamata on January 2.

The Sonic Surf Race series will be contested over four rounds across four disciplines; iron, board, ski and swim. The top-10 ironmen and women will also compete in a three-round Eliminator Grand Final during Oceans 13 at Mount Maunganui in late February.

"We were delighted with the success of the Sonic Surf Race series last season - it gave our athletes some meaningful competition and was the ideal springboard for many of them to compete with with distinction at the world championships in Adelaide," SLSNZ high performance manager Brad Edwards said.  "We've made a few refinements this year and we're confident the series will continue to grow."

The first event on Saturday begins at 9am, with the canoe and boat arenas starting at 10am. 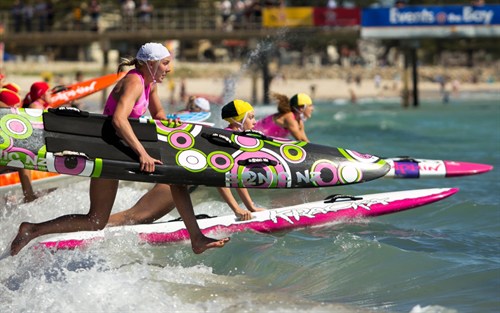