He's spent the last few years flying under the radar but Gisborne surf lifesguard Ollie Puddick picked the perfect time to pop his head up today.

The 20-year-old Wainui club member upstaged a qualify field to win the ironman title at the Whangamata Classic, which doubles as the first round of the Sonic surf race series.

Puddick, who turns 21 next month, has spent the last three years based on the Gold Coast at the Kurrawa club but has recently returned to coach juniors at Wainui and have a crack at the New Zealand scene.

"I've always been told the ability has been there but I haven't been able to use it properly, racing smart and putting it all together," Puddick said.
"Today showed that I finally can - I was pretty stoked with the way I raced.  Now I'm keen to just keep fit, train hard and see if I can take out the Sonic series."

His form wasn't limited to the ironman discipline.  He was leading the surf race, before a wave brought four other swimmers through ahead of him, and finished third in a classic ski race, won by Olympic kayaker Steve Ferguson.

Taylor didn't go home empty-handed, winning the surf race and finishing third in the board race in the carnival, which was jointly hosted by Surf Life Saving Northern Region and SLSNZ Eastern Region.

The ironwoman race was taken out by Papamoa teenager Natalie Peat, like Taylor, fresh from a classy campaign with the New Zealand under-20 team at the Rescue 2012 world championships in Adelaide.

That experience has given the 18-year-old a huge boost for the national series - she won the surf race series last year but is having her first proper attempt at the open women's grade this season.

"There's a bubble of talent rising and it's exciting - girls like Jess Miller and Katie Wilson from Mount Maunganui and Danielle McKenzie are coming through and it definitely seems like the under-19s are taking it to the open women at the moment," Peat said. "My worlds experience was just a massive confidence booster, even though I didn't get the results I was hoping for on the beach.  I got to race those high-quality Australians and took it to them."

Wilson, 17, finished second in the ironwoman, while Miller won a sprint for third with McKenzie (Mairangi Bay) fourth.

Predictably, Peat also took out the surf race from her national under-20 teammate, Omanu's Dannielle O'Connor, while McKenzie comfortably won the board race from Wainui 16-year-old Jasmine Smith.

Red Beach and Karekare won the men's and women's canoe titles respectively, on an action-packed day amidst the big crafts.

The Piha men's A boat crew continued where they'd left off in the national surf boat series, holding off their clubmates, the Piha Pistols, while Mairangi Bay captured the women's boat title.

The boat crews will be back in Whangamata on January 2 for the second round of the national series, while the Sonic Race series moves on to Oakura Beach in Taranaki in mid-January for the Central Region championships. 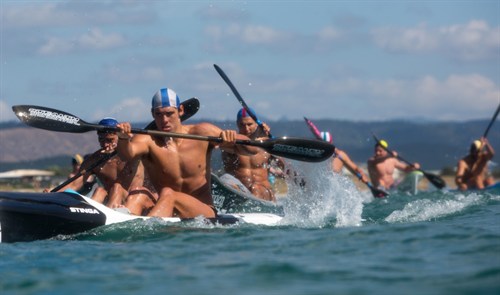 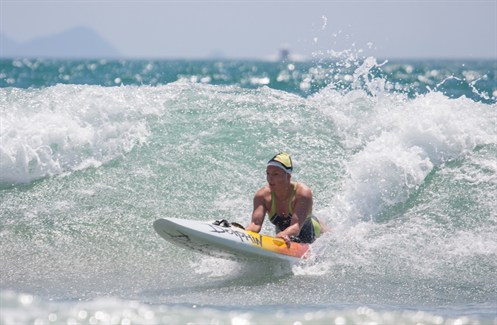 Papamoa's Natalie Peat on her way to victory in the ironwoman at the Whangamata Classic surf lifesaving carnival.
Photo by Jamie Troughton/Dscribe Journalism