A trio of outstanding Omanu ironmen will be chasing a win in the feature race of this year's Pak' n Save Omanu Classic.

Last year's Classic was cancelled, a victim of the awful Bay of Plenty summer, but the sixth running of the annual surf lifesaving carnival on Sunday is looming as a stunner.

The feature race of the $2000 Classic is the Ian Porteous Memorial Ironman, with its distinctive 'M' shaped course and a proud history of producing outstanding winners.

This year's contenders include Max Beattie, Dan Hooker and Ben Cochrane, three Omanu club members who starred at the national championships in March; Beattie won the open ironman, Hooker was third in the under-19 division and Cochrane took out the under-16 ironman crown.

The Gold Coast-based Beattie, who turned 21 on Thursday, then went on to star in the New Zealand team's victorious march through the Rescue 2012 world championships in Adelaide and his training partner Hooker believes he'll be very tough to beat on Sunday.

"I've noticed a big difference in the way Max trains this year - he's up at 4.30am without fail, six days a week, doing a mixture of swimming, ski paddling and board paddling," Hooker said. "I can see he is determined to not only be the best ironman in New Zealand but the best in ironman the world and you could see his hunger when he finished second to the untouchable Shannon Eckstein at the worlds in November and contributed hugely to the Black Fins winning the world title. Right now, he's in the best form of his life."

Cochrane is technically the defending Ian Porteous Memorial Ironman champion, after club officials put it up for grabs at the Omanu club championships in March. Sunday's event promises a much stronger field however, including Mount Maunganui's Sam Shergold and Lyall Bay's Ryan Cox, although 2010 champion Cory Taylor (Midway) is injured and will miss resuming his battle with Beattie.

Beattie was raised in Australia but has family here and has raced at the Omanu Classic over the last seven years.

Hooker's swim training has taken a hit lately as he's just started working full-time as a lifeguard for the Gold Coast City Council, patrolling iconic Surfer's Paradise Beach, although he believes he's in the best ski-paddling shape of his career.

"Omanu have some great ironmen coming through the ranksand it would be great to see an Omanu clubbie take out the Ian Porteous Ironman - the title carries huge bragging rights and is a great test amongst the ironmen of New Zealand early on in the season."

Ian Porteous was an Omanu stalwart who died suddenly in 1995, a day before the club's annual long-distance carnival.  His great mate and fellow clubbie Denny Enright decided the 1996 event would be an ideal tribute and the event has grown since then.

There are some impressive names on the Ian Porteous trophy, with Aaron Jarman, Cory Hutchings, Andrew Newton and Matt Sutton all having tasted success.

The Omanu Classic is a fast-paced afternoon carnival with $2000 worth of prizes on offer.  It features a full range of water events, with board, ski, swim and boat events. The surf boats will be using the racing to prepare for the next round of the national series in Whangamata on January 2, while the carnival will be ideal preparation for surf athletes getting ready for a busy January.

Racing gets underway at 12.15pm, with spectators and supporters warmly welcomed. 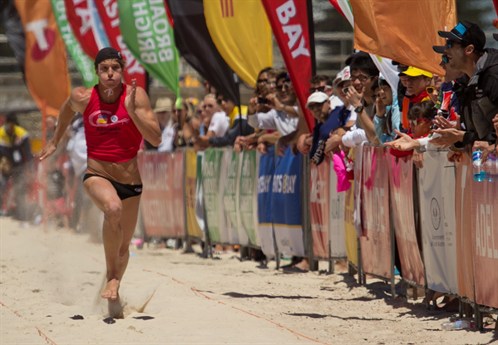