Mount Maunganui held off a fast-charging Papamoa to claim the Bay of Plenty surf lifesaving championships on their home beach on Saturday, in the ideal start to the summer competition season.

Clubs from all over the North Island turned up, including large contingents from Wellington's Lyall Bay, Gisborne's Midway and Taranaki clubs Fitzroy and New Plymouth Old Boys, tussling in hot sunshine against seven Bay of Plenty clubs.

Despite a lack of swell, the flat conditions were the perfect fitness test for athletes, especially those who have just returned from the Rescue 2012 world championships in Adelaide.

Papamoa picked up valuable points in the under-19 and under-16 agegroups, however, with Natalie Peat and Mason Bryant featuring, while Omanu's Ben Cochrane comfortably took out a quality field in the under-19 ironman.

The competition season continues in earnest this weekend with the second round of the BP Surf rescue national IRB season in Whakatane, followed a week later by the first round of the Sonic Race Series in Whangamata. 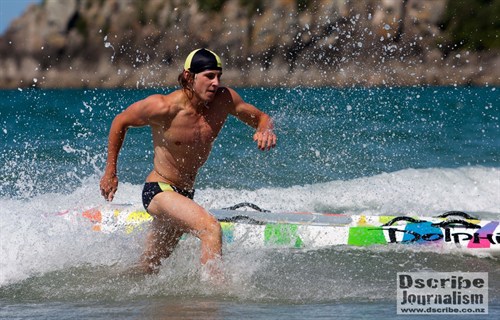 Papamoa's Danny Hart competing in the board relay. Photo by Jamie Troughton/Dscribe Journalism