The 19-year-old Manly star, fresh from a brilliant campaign at the Australian titles on the Gold Coast, is now in line to emulate her father Daryl, who pulled on a black jersey in 20 tests for the Kiwis during a stellar rugby and league career on both sides of the Tasman.

The world championships - Rescue 2012 - will be held in Adelaide in November and Halligan has given up a spot in the Australian high performance squad to make herself available for New Zealand.

"It was just a personal decision - I've always classified myself as a Kiwi, plus I really wanted to race opens at the worlds," Halligan said.  "I know a lot of the Kiwi high performance squad and get along with them really well, so this was a pretty easy decision for me in the end."

She joins 16 others in the New Zealand world champion squad and goes in with peerless form.

Last month, she won the New Zealand open and under-19 ironwoman titles and went within metres of repeating that double at the Australian championships last week, winning the under-19 title and finishing second in the open.  Halligan had the unprecedented honor of claiming the overall top female athlete title at both national championships, within a fortnight of each other.

She also starred at February's Lion Foundation Surf League in Mount Maunganui, having linked with the Midway club in Gisborne last year.

"I had an absolute ball when I was back in New Zealand and I'm going to be looking for more excuses to come back and race there."

The former New South Wales age-group netballer, who has recently moved to Brisbane to study, has also got unwavering support from her parents, Daryl and Linda, and siblings Cooper, Bronte and Inde.

"Mum and Dad are pretty proud and would've supported me whoever I made myself available for, though I think they're secretly even more pleased it was New Zealand!"

New Zealand is sending two teams to Rescue 2012 - a 12-strong open team and an under-20 development team. 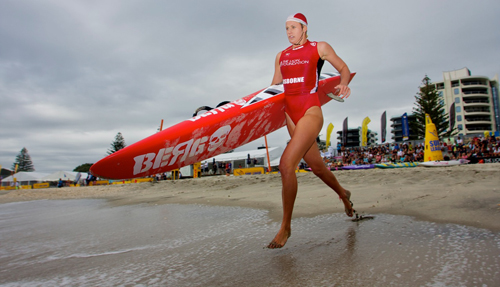