They've only got a couple of training sessions behind them but defending national IRB champions Andrew Cronin and James Morwood will add some spice to the second round of the BP Surf Rescue series in Whangamata this weekend.

The event will double as the North Island championships - which the East End pair dominated last year - but they've opted to build slowly into a big season for the sport.

They missed the first round of the series in Omaha last month, which was dominated by Muriwai's David Butt and Brent Matuschka and Waimarama's Mike Harman and Ben Cross.

Seasoned Paekakariki pair Brent Harvey and Richard Winham will also compete in the premier division, Brighton's Lance Lungley and Simon Roberts will make the long trip up from Dunedin and the second East End crew, Geoff Cronin and Campbell Begg, should also be very competitive.

The women's division has also been bolstered, with East End's Laura Begg and Kirsty May joining the series for the first time, along with slick St Clair sisters Carla and Stephanie Laughton.  Sunset Beach - hailing from the mouth of the Waikato River - were a surprise package in the first round with Alana Ibbs and Mal Mcguire impressive, while Ruakaka, Mount Maunganui, Kariaotahi, Otaki, United North Piha and Westshore will also be represented.

Waimarama's senior team of Timothy Cox and Jason Harman dominated the senior division in Omaha, while Mount Maunganui twins Kirby and Chad Wheeler were the pick of the under-21 crews.  Both crews face a lot more competition this time around.

Competition will start at Whangamata's main beach at 9.30am on both Saturday and Sunday with a full program of rescue events.

Meanwhile, Surf Life Saving New Zealand has announced a change in venues for the 2013 and 2014 BP Surf Rescue New Zealand Championships.  Whangamata was to have hosted the 2013 nationals but the date clashes with the Beach Hop music festival.  Waipu Cove will now host the championships in 2013, with Whangamata taking it up again in 2014. 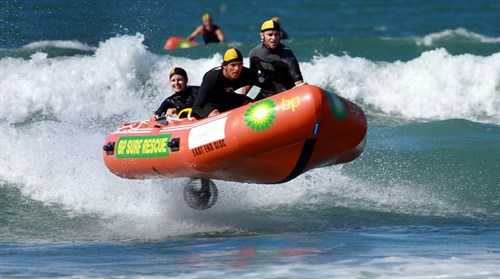