Ferguson in form in series opener

Triple Olympian Steven Ferguson will retire from kayaking after the London Olympics but that won't be the end of his competitive ambitions.

The 31-year-old wants to have one more crack at the New Zealand surf lifesaving team, with the Rescue 2012 world championships to be held in Adelaide two months after London.

He made a strong statement to selectors today at the first round of the Sonic Surf series in Whangamata, cleaning out to win the ski race and finishing fourth in the surf race, despite little in the way of recent swimming training.

"I've got good fitness from my kayaking and swimming's a bit like riding a bike - I just swing my arms around and it all comes back to me when I'm under pressure!" Ferguson said.

The son of Olympic kayaking great and former surf ironman Ian Ferguson has plenty of pedigree, competing in breaststroke at the 1998 Commonwealth Games and the 2000 Sydney Olympics before switching to kayaking.

He also competed at the 2002, 2004 and 2006 surf lifesaving worlds and would love another crack six years after his last appearance. He's moved back into surf this season as coach of the Piha club.

"I've told the selectors I'm pretty keen, if that's something they're interested in. This will be my last year of kayaking and I'll be extremely fit after the Olympics so I'll try and bring that into surf if I get the opportunity. Once you've done it before, you understand what it takes to get there so it's really just a case of putting the hard work in."

Other features of the Whangamata carnival included the continued emergence of teenaged Papamoa sprinter Kodi Harman, who beat a classy field in the beach sprint just six days after winning the national schools 100-200m track double.

Red Beach's AJ Maney, who turns 21 next week, had an early birthday present with a surprise win in the feature ironman, helped by leader Cory Taylor (Midway) falling off the side of a wave with the beach in sight.

Arna Wright (Mt Maunganui) underlined her value to the New Zealand selectors, comfortably winning the beach sprint, taking out the women's board race title and finishing third in the beach flags.

Another Papamoa teenager, Natalie Peat, won the open women's surf race and finished third behind Boon and Mairangi Bay triathlete Danielle McKenze in the open ironwoman.  Boon also finished second in the surf race and in the board race.

The surf boat races went according to form, with both national men's champions Piha and women's titleholders Mairangi Bay comfortable in their victories today.  Both crews will be back at the venue in a fortnight for the second round of the national series.

The Sonic series, meanwhile, moves on to the Central Regional championships at Oakura on January 15, followed by the Eastern Regionals - formerly the NRCs - at Mount Maunganui on January 28 and 29 and the Northern and Southern championships on February 18 and 19.

Athletes need to compete at three of the five rounds, with the top-10 ironmen and women qualifying for the decider during lunch time on the third day of the Oceans 12 championships at Mount Maunganui on February 25. 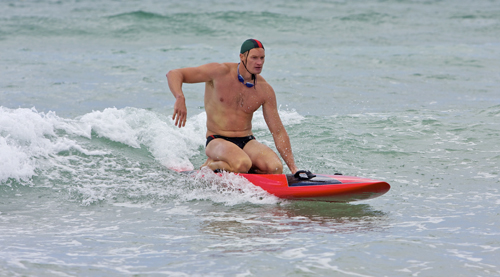