New Zealand's best female boat crew had double reason to celebrate the opening round of the national series in Paekakariki today.

Defending national champions Mairangi Bay went unbeaten through five races, dominating their three heats, semifinal and final with no other crews coming within three boat lengths by the end of their races.

The opening round of the series also gave the women's crews the chance to qualify for a trans-Tasman row-off against the top Australian crew at an Australian Surf Rowers League carnival in February.

"We'd like to retain the three main titles we won last year - the short course and long-course national titles and the series title - and we want to then go over to the Australian nationals and do better than any other New Zealand women's crew has ever done over there," Mairangi Bay second stroke Nina Reid said.   "But first we needed a good start and that's what we got today.  We were pretty focused on doing well because of the ASRL spot up for grabs as well."

The crew has had one change from last year, with Erin Tolhurst joining her sister Carmel in the crew, replacing the departed Rochelle Haden.  Reid and Sarah Woolley compete the ranks, with Rob Jones sweeping. Reid said that Erin Tolhurst had picked things up really quickly since the crew started training again in September and had improved out of sight, seamlessly helping the crew continue their dominance. In the final, Mairangi Bay easily accounted for Orewa, with Canterbury's North Beach third.

It capped a great day for Piha, with the club's under-23 men and under-21 women also winning their finals.

The under-19 men's final was won by Waihi Beach, while Blenheim's Rarangi took out the under-19 women's race. 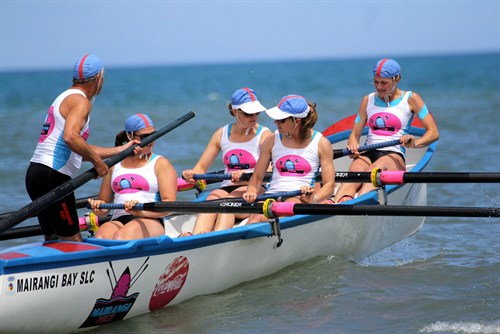 Mairangi Bay's top women's boat crew on their way to victory in the opening round of the national series in Pakakariki today. Photo taken by Jamie Nilsson